Exploring replacement priorities in the city of Malden, MA

The city of Malden, MA still has a large number of drinking water service lines which are made out of lead, either on the city side (under the street and sidewalk) or the private side (from under the sidewalk to the basement).

Lead exposure is hazardous to health, especially for children. Service lines made out of lead have the potential to expose inhabitants to lead toxicity. Because lead has disproportionately serious impacts on young children, the goal of this project is to explore the intersection of where the lead service lines are and where the city's children live.

Take me to the explorer tool →

According to The Boston Globe, as of 2016 "Malden is the community [in the Boston area] with the highest percentage of service lines made of lead; 47 percent of the city's 11,682 service lines are lead, according to the Massachusetts Water Resource Authority's best estimates." 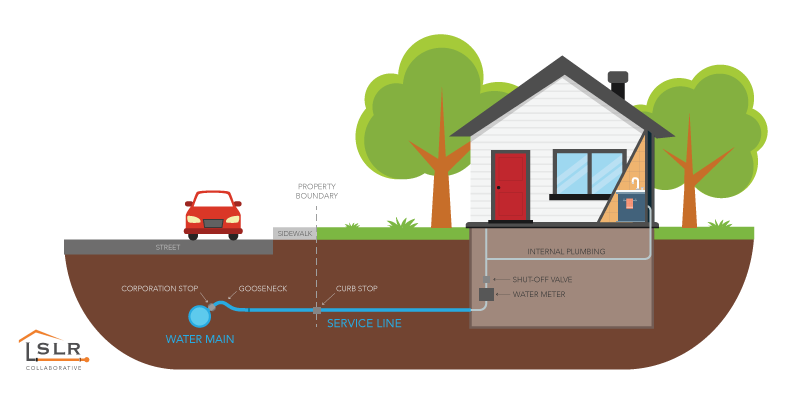 According to Potash et al, "Exposure to lead has been found to be associated with premature birth and early neurological development issues such as edema, herniation, atrophy, and white-matter degeneration. Lead can cause vomiting; convulsions; paralysis; and, in high concentrations, death. Elevated blood lead levels are associated with lower IQs in children. A retrospective study by Mazumdar et al shows that, on average, a 1 µg/dL increase in blood-lead level is associated with a decrease of 1 IQ point among six-month-olds and 2 IQ points among 10 year olds."

In this tool, we'll look at which parcels in Malden have both lead service lines and children living in the home, and then add up the years of possible exposure at the level of a street segment (usually 1-2 city blocks, around the right size for a scheduled lead service line replacement project). To calculate years of exposure, we will assume that a child will live at a certain address until the age of 18. That means that a five year old child living at a parcel with a lead service line is assigned 13 exposure years (18 minus 5). This is not perfect, because the family could move to a different address or the service line could be replaced in that time.

For more information about the problem, the project, and the methodology, you can check out the about page. To see whether there is lead in your property or at a parcel where no children live, you can use the City's official GIS map. You should be aware that the number of recorded private service lines might not be fully accurate or updated, but the City will inspect your service line for free if you submit a request online here.

Here, we can experiment with the following question:

Take me to the explorer tool →

The annual World Smart City Awards is an international competition that "seeks to recognize pioneering projects, ideas and strategies making cities around the world more livable, sustainable, and economically viable." This project was a finalist for the "Innovation Award".

New student data was obtained from participating schools, and the explorer tool was updated.

A peer reviewed paper explaining the methodology and case study in Malden, "Prioritizing municipal lead mitigation projects as a relaxed knapsack optimization: a method and case study" (doi: 10.1111/itor.13212), was published in the journal International Transactions in Operational Research.

There is a paywall for non-academic users, but the pre-print version of the paper is virtually identical and always open access (link).

The Center for Digital Government recognizes this project as one of its 2022 project winners. From Malden's press release:

The City of Malden was one of ten cities nationwide recognized with a Project Award by the Center for Digital Government (CDG) at last week's virtual GovX conference. Now in its sixth year, the conference highlights the achievements and best practices of states, cities and counties that are radically improving the experience of government services.

Malden's continuing efforts to use data to inform allocation of American Rescue Plan Act (ARPA) funds gets a nice write up by Meredith Gabrilska at the Massachusetts Municipal Association. This framework is helping inform city planners about the highest priority potential projects from a health impact perspective.

This research and tool is mentioned in a City press release on the use of American Rescue Plan Act (ARPA) funds to accelerate LSLR projects. The announcement was picked up for the October 15, 2021 edition of The Malden Advocate.

New student data was obtained from participating schools, and the explorer tool was updated. Some improvements to the data pipeline this time around include the way parcels are assigned to street segments, and the method of matching students to parcels.